DID YOU KNOW THAT DR. HECHT WAS CHOSEN AS THE HUMANITARIAN DENTIST OF THE YEAR?!?
Yup, it’s true.
This year Dr. Hecht was chosen by the Crown Council as the recipient of the Francis Hammond Humanitarian Award for his selfless nature and incredible efforts at “Giving Back.” The award was presented at the Crown Council Annual Event in February 2011 at the Biltmore Hotel in Phoenix, AZ. Click Here to read the full version of the Award Speech. 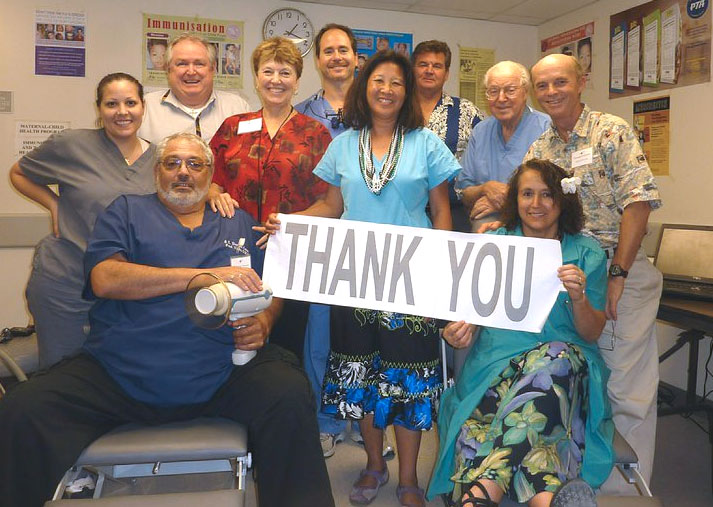 DR. HECHT IS NO STRANGER TO SERVICE AND GIVING BACK. During his first few years of marriage he was forced to balance his time between a full-load of classes at dental school and two part-time jobs. Had you known him then, you might have seen him delivering 5-gallon jugs of water or working hard as a phlebotomist. Fortunately, his years of struggling and hard work have paid off. He is very grateful that he has reached his goal of becoming a dentist so that he can share his services with those in need, both in his community and abroad.

In 2009, Dr. Hecht participated in a Crown Council sponsored charity event entitled “Miles For Life.” After 4 grueling days and 1000 miles on motorcycles, Dr. Hecht and 40 other dentists from across the country raised 100,000 dollars for the Smiles for Life Foundation, benefiting children around the world.

Not only has Dr. Hecht provided numerous charity cases for local residents of Staten Island who are disabled and on fixed incomes, he has traveled abroad on multiple occasions to countries such as Belize, Guatemala, The Dominican Republic, and Micronesia to name a few. Here he was able to provide service to towns without dental chairs or even running water.

His latest trip was to South Africa in June 2012. Here is the quick report on their trip for the press:

Adventuresome Dentistry in South Africa by Staten Island DentistAngela Bocchino and Dr. Frederick S. Hecht of Staten Island Dental Care have just returned from a very rewarding trip to poverty and aids stricken areas in South Africa. They spent their first week in an economically devastated area of Johannesburg called Zandspruit. “We saw several hundred patients, extracting and filling teeth. The people were so grateful and appreciative of the distance we traveled to help them” said Dr.Hecht. While in Zandspruit they were hosted by the leaders of Network of Caring.

They spent their second week in a village about 6 hours drive south of Johannesburg called Tugela Ferry where they were hosted by Rebuild Southern Africa Association. The dental patients were mostly orphaned children whose parents had been wiped out by the aids epidemic.

“The trip was long and many hours were spent on the airplane and in cars. There were no dental chairs, not very much ambient light, very challenging conditions. On our long trip home, we reflected on the number of lives we touched and changed and how fortunate we are to live in a land of opportunity.” said Angela Bocchino.

Ever since his first oversees trip in 1996, Dr. Hecht has made it a goal to make about 1 international humanitarian trip a year.  Though every trip he takes requires lots of hard work and long hours, he is grateful for the opportunity he has to make a difference in so many lives.

We Are Open On Saturdays

HOW IT WORKSNote: Mobile message and data rates from your cell phone carrier may apply.

NagiosCheckValue - Do not remove please